Margaret Magruder was elected to her first term as Columbia County Commissioner for Position 1, in November 2016 and was sworn into office on January 3, 2017. 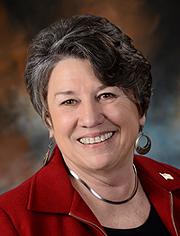 A lifelong resident of Clatskanie, Margaret is passionate in her commitment to Columbia County and its residents. She has more than two decades of public service involving Columbia County business, government and non-profits.

Before being elected in November 2016 to Commissioner Position 1, Magruder had served as a member of the Columbia County budget committee for 20 years. In this capacity she assisted in developing the county budget, reviewed the annual budget document and took comment from county department heads and county residents before approving it. Frugal in her personal life as well as professionally, she is an advocate of responsible budget cuts, conservative spending and paying down the county debt ahead of projected schedules.

Commissioner Magruder has a deep commitment to the environment. She served as the Coordinator of the Lower Columbia River Watershed Council from 1996 to 2016. She is a board member of the Lower Columbia Estuary Partnership, a position held since 1997. In 2006 she was honored by the United States Department of Agriculture National Resources Conservation Service as the National Earth Team's individual volunteer of the year for her many years of assisting people to efficiently manage and responsibly conserve, improve, sustain and utilize our natural resources.

Margaret’s significant economic contributions to rural Oregon earned her special recognition by the Oregon Leadership Summit in 2008 for her efforts to achieve sustainable solutions that benefit rural communities, the environment and the economy.

“My commitment is to bring balance to the economic, environmental and cultural concerns of county residents while protecting livability,” she says. “My vision has always been of a prosperous and productive Columbia County, utilizing our natural resources and our citizen resources to create a thriving county serving the needs of all citizens."

Commissioner Magruder lives in rural Clatskanie and is a graduate of Clatskanie High School. She holds a Bachelor’s Degree in Political Science and Russian from Willamette University, and earned a Master's Degree in Slavic Languages and Literature from Syracuse University.